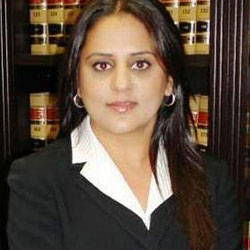 Raazia Bokhari earned her Juris Doctorate degree from Western State University College of Law and passed the California Bar in 2008. Ms. Bokhari is also a registered patent attorney with the United States Patent and Trademark office.

While earning her J.D. degree, Ms. Bokhari interned at Phage Pharmaceuticals, Inc. from 2005, where she was subsequently hired as the Intellectual Property Advisor for the corporation at the completion of her education. At Phage Pharmaceuticals, Inc. she prosecuted and oversaw an extensive patent and trademark portfolio. Additionally, she intricately worked with the General Counsel on other legal matters concerning the corporation.

In 2009, Ms. Bokhari shifted her focus from Intellectual Property Law to Immigration, Family, Bankruptcy and Criminal Law. In 2010, Ms. Bokhari founded the Law Offices of Raazia Bokhari, APC where she believed that she could be more effective in helping people deal with a variety of legal issues. Ms. Bokhari practices exclusively in the areas of immigration law, family law, bankruptcy law and criminal defense.

The Law Office of Raazia Bokhari, APC has allowed Ms. Bokhari to fully realize her passion for advocating for those who are unable to advocate for themselves.